Swordsman online is a free to play Chinese martial arts-themed action MMORPG. Players get to explore a world full of martial arts and chivalry, honor and glory. From the 10 martial art schools all with their own fight styles, flashbacks, to even a storyline interwoven with burning ships and some of the famous battles during the Ming Dynasty in China.

Swordsman offers a great experience to all its players. You can fight with your hands, weapons, or use a combination of several of the martial arts schools to create your own style worth defending. 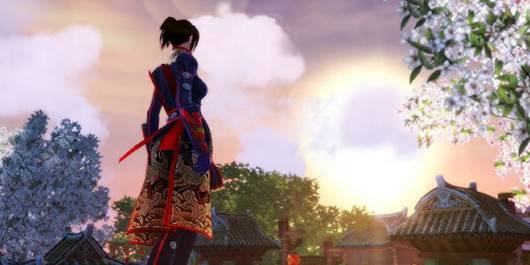 Swordsman Online has one of the most in depth creation processes I’ve seen in an MMO. First you choose your gender, then get to choose a portrait to base your appearance off of, which seems pretty limited at first. Right after selecting the portrait you get faces, hair, eyes, body, and every other customization option from presets to advanced settings with sliders. It allows for some absolute hideous or beautiful characters that can be as unique as the owners of those characters.

You don’t get to choose which school you follow at the creation process, because you go through a tutorial where you only know basic martial arts (kicking and punching). You must first progress through the first town in order to choose a school to follow.

The 10 Schools of Martial Art

Although some people may want to follow this evil and mysterious 11th school, they don’t get to. You get to choose which of the 10 schools you initially follow at lvl 5.

There are 10 schools each using a different weapon and fight style from ranged to close combat to assassinations and quick disappearances. You can choose to follow the Five Venoms Cult, WuTang, Sun and Moon Cult, House Tong, Shaolin, Zephyr, Splendor, Harmony, Infinity, or E’’mei as your initial fighting styles.

I chose to follow the Five Venoms Cult, which is a female only whip using school. Mastering the whip takes practice and patience, but it rewards with poisonous, explosive damage to anything in their path. Their skills that exemplify them are the Sky Scracker (Rapid strikes hit everything in front of you), Venom Doom (spinning in a circle, poisoning enemies and boosting speed), and Arachnida (snaring enemies from behind with a whip). One of the funnest classes in parties. They also fight alongside battle pets, which reminded me of my days playing as a Venomancer in PWI. 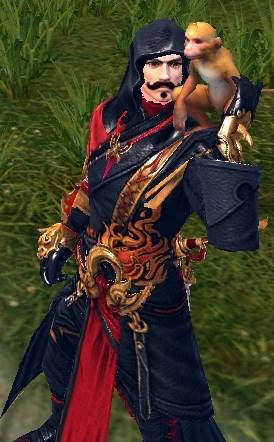 As you enter the game for the first time you have the option to choose 1 of the 3 most commonly used MMO controls. Click to Move is the one on the farthest left which allows you to click to move and fight. The middle is the most commonly used MMO style with WASD movement and clicking to attack and use skills. The third option is the traditional action style movement which puts you into an over the-shoulder third person view and uses the mouse to attack with 1- 4 being skills, but still moves with WASD.

The idea of offering all 3 is something I’ve not seen in a game in a very long time. This was definitely a unique twist on the approach to make the game fit all types of players in whatever control type they prefer. At the same time, everything can be changed by changing key binds so if the three types aren’t what you prefer, you can always change it after.

Being a martial arts action MMORPG, Swordsman offers a great deal of acrobatics. You can jump, double jump, leap, soar, glide, dash, sprint, and even flip from building to building as you level up more and follow the quests.

You start off with not being able to even double jump, however. But even so you start getting these acrobatic skills over time so it pays off and is a unique way to learn how to soar the air and defy gravity as a martial artist. The style of acrobatics reminds me of Age of Wushu but it put together better.

There are several horse mounts in the game all varying different colors, but they all seem to have the same speed. The colors can vary between white to gold to red, like realistic horses and they ride with great visuals that appear pretty realistic too.

The thing I noticed and enjoyed most was that you can be moving and mount the horse as well. The character leaps onto the mount and begins riding off with it, which is pretty cool. Few games offer realistic mechanics like that.

There is an option to auto dismount while in combat or picking stuff up, sadly showing that mounted combat isn’t possible. But who needs to fight on a horse when you can fight while in the air after all.

On top of the school fighting style you choose, each style has its own element that it uses to boost damage to those vulnerable to that element. While most schools only have 1-2 element choices, all of them start with the initial one, and the Five Venoms Cult can use Earth, Fire, Ice, and Poison which is far more than any other clan. Being aware of which clan can follow which element is an important choice when selecting a clan to follow. 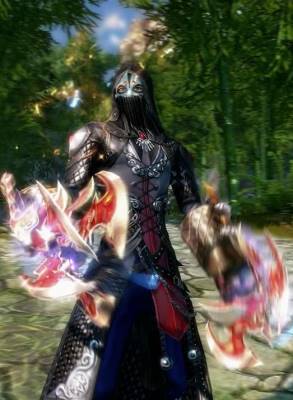 The guilds in Swordsman are very diverse and have a lot of factors involved with them. Guilds can have multiple ranks, launch their own custom events for their members, and even battle against other guilds in a “Turf war” for ownership of land. You can join a guild at level 20, and it makes it easy to find parties and join other players to make things easier. You can also participate in the activities that people on their own cannot do.

There are two types of guilds, each with their own focus:

Mercenary Band: If being a hero and keeping the peace is for you, then a mercenary band is perfect. Investigations, escort missions, and defeating outlaws with bounties are just some of the tasks they can do.

Bandit Camp: Money makes the world go around, some say. These people simply do things for the money. Rescuing criminals, kidnapping for ransom, hijacking, and so forth are the type of things they do. The Bandit Camp focus offers a more unique style of guilds than I’ve seen in any other MMOs.

Guilds can be leveled up to lvl 9, so it’s always a good idea to consider their lvl when joining one. Guilds can have multiple branches around the game world, so it adds the ability to make a guild as large as you like. The branches can give more rewards for escort/hijack missions. You can create a guild at lvl 35 if joining one isn’t for you. The process to making one is unique and requires you to team up with 4 others to tackle a series of quests to determine your “worth” as a guild leader (solo guilds aren’t possible for creating one).

There are always epic loots from dungeons, Swordsman is no different on this. Some of the best gear comes from dungeons but only for those who can tackle the challenges successfully.

PvP is offered in an open world sense for those who want to partake in the challenge of fighting other players. You can duel, enter arenas, or just take out the bounties on those who pick on the newbies of the game. PvP is ranked and can give the players a good deal of benefits if they get high enough wins.

Upon playing this game, I was expecting to play a game full of bugs and glitches, since that’s how every PWE game had started off. To my surprise, this was not the case and Swordsman has a very smooth gameplay and world.

There was always something to keep me interested and being able to use a whip as a weapon with a pet, like a true tamer, was downright awesome. I’ve seen many things in this game, that haven’t been seen in games in over 8 years. This game seems to seek to rival PWE’s first successful game, Perfect World International, on terms of customization.

Overall, I’d say Swordsman Online is definitely worth trying if you like martial arts action games. The story seems slow at times, but with flashbacks it creates an awesome arc that combines things like never before in MMOs. So for me, Swordsman is a great game that can deliver on its promises!