Runes of Magic is an excellent free to play MMO that truly has something for everyone. It is perfect for the player that wants a great MMORPG experience, without having to pay a dime. This game has a large amount of customization, numerous quests and activities, and is an all-around joy to play.

At its core, Runes of Magic is a typical MMO in every way. It has a fantasy setting, there is a great evil that must be defeated, players must choose a race and a class, and the combat is also quite similar. While it may seem like just your average MMO, it is actually the perfect blend of all of these features. The story is simple, yet it still draws players in and makes them care about the world of Taborea. There are many different chapters, or quests story arcs, throughout the game. The story arc that players will first go through is the Rise of the Demon Lord. The peaceful land of Taborea is plagued by evil when the evil Demon Lord rises from the depths. It is up to the player’s character to vanquish this evil and save the land. All in all, the story is fun to get into and it really sets the mood for the game. 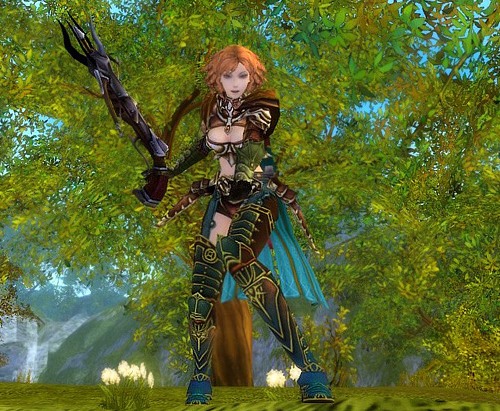 As with most other MMOs, the character creation is a large process in Runes of Magic. The avatar customization in this MMO is quite intense, as there are an enormous amount of options. This is built for the player that wants to take their time to craft the perfect character. Of course, players do not have to spend a large amount of time on this and they can create a simply character, but customization is definitely encouraged. Overall, Runes of Magic has one of the best avatar customizations out there.

There are numerous different classes in the game, some built specifically for one race. There are three races in Runes of Magic, each possessing special attributes and classes. Currently, the races are as follows: the Humans, the Elves, and the Dwarves. The Humans are known as the the most versatile race in the game. They have access to 6 different classes: Warrior, Mage, Rogue, Knight, Scout, and Priest. The Elves are advertised as the masters of avoiding danger and they currently have access to 6 classes: Warrior, Mage, Rogue, Warden, Druid, and Scout. Finally, the Dwarves have a great combination of magic and strength and also have access to 6 different classes: Warrior, Mage, Rogue, Priest, Champion, and Warlock. Choosing a race and a class is a big decision in Runes of Magic as it heavily affects gameplay. Players should always think about how they enjoy playing the game and choose a class and race based on that.

In Runes of Magic, crafting is known as professions. There are numerous professions and each one creates different styles of items. Every race can craft and they are also able to practice with any profession. To increase their skill in a certain trade, they must simply practice with it often. Some of the professions are Alchemist, Armorsmith, Weaponsmith, Cook, Miner, and much more. The great thing about crafting in Runes of Magic is that it is simple and easy to accomplish. Players simply must gather the resources they need and they can create the item that they would like, as long as they are properly trained in that certain profession. It is best to become familiar with it, as it can be very beneficial as the game moves forward.

One feature that many other MMOs lack is the use of player housing. Every player is able to get and customize their very own home in the game. They can personalize it to their liking and it is a great addition to the game. It is one of the many things in Runes of Magic that truly allows the player to dive right into it. If the player is not careful, they can easily get lost in the world of Taborea. Players can visit friend’s homes and invite people into their own. They are also able to create a garden at the house, allowing them to use the plants for crafting.

If having player housing and an enormous customization system wasn’t enough, Runes of Magic helps draw in players even more with its use of a relationship system. For the players that enjoy a little online romance, Runes of Magic actually has a detailed feature that lets players “go steady”. Once the two players feel that they are ready to take that big leap of faith, they are able to marry one another. It may not matter to some players, but to others this can be an incredible feature in the game. Many MMOs have relationships in them, but they do not have a system to deal with it. This way, players can truly escape to this incredible world and dive into the character they have created. When two players marry, they are even able to have a wedding. It is a wonderful addition to the game that helps it feel more alive for the players that roam its lands.

The quests in Runes of Magic are quite simple, though they do vary as player’s level up. It will be the typical MMO scenario in which the player must defeat a certain amount of enemies or fetch a specific item. Of course, this does not mean the quests are not fun. They are extremely enjoyable and as the player levels up, they will have access to more detailed quests. Runes of Magic is challenging, but not in a way that should scare off casual gamers. Certain enemies and bosses do require a bit of strategy to defeat, but there is nothing in the game that is too terribly difficult to beat. One of the absolute greatest things about Runes of Magic is the amount of quests and activities that are available. Currently there are multiple different add ons that are completely free and there are over 4,000 quests and series to play. It has enough content to keep even the most hardcore gamer satisfied. In addition to that, the game is constantly updating with even more free content. For the players that are looking for a long lasting game that has enough content to last for months, Runes of Magic is the perfect option. 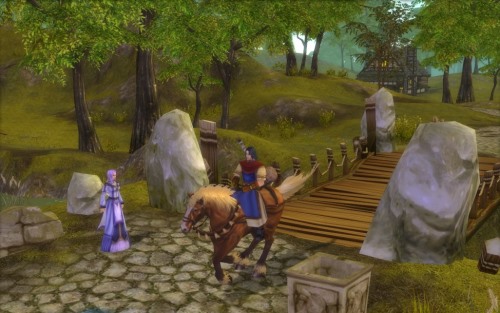 Like most MMOs, Runes of Magic has an extensive system for its pets and mounts. Players are able to purchase a variety of mounts to ride upon during the game. There is something to suit everyone’s taste. As for the pets, it is a great companion system. It allows players to have an NPC at their side to help them in tough situations. Again, there are multiple different options to choose from, so everyone will be able to choose a pet that works best for them. This adds depth to the game and it helps the player feel even more at home in the land of Taborea.

Another unique feature that Runes of Magic utilizes is a dual class system. It allows players to mix and match their skills from other classes for total combat customization. With this feature, players are able to build their perfect character and fight exactly the way they want to. It may take some time for a new MMO player to become accustomed to it, but it is actually quite easy to master. This system also opens up hundreds of combo opportunities.

For the players that love PVP, Runes of Magic certainly delivers. There are incredible PVP sieges and there is also open world battling. Open world PVP is always exciting as it adds an entirely new dynamic to the game. If players feel that the game is too easy or they simply want a more difficult challenge, open world PVP certainly brings achieves this. Players will constantly have to watch their backs to ensure that they do not get destroyed by an enemy looking for an easy kill. In addition to open world PVP, there is also a way for guilds to battle one another, offering a great team activity for the game. The PVP scene is quite intense and it is certainly a blast to play.

Runes of Magic is an excellent free to play MMO that is perfect for veteran MMO players and new players alike. It may look like an average MMO, but it is actually one of the most solid MMO games on the market. For no cost at all players can have access to an amazing customization system, an intense PVP scene, and enough content to last them for months. It is a game that everyone should try and seeing as it is free to play, there is absolutely nothing to lose, but everything to gain.