Paragon is an MMO battle arena that brings a unique twist to the genre. From astounding detail put into heroes, to the amazing landscape that is the arena, you feel fully emerged into the fray of battle. What’s unique about this one, is the fact that it isn’t top down and controlled with the mouse. Instead, you are in direct control of your hero, using WASD and able to jump as well, in a third person style. The game features a wide cast of heroes to choose from, none of which you have to purchase to gain access to, and a plethora of ways to power them up to fit your playstyle best. Lets dive in and go over what makes Paragon fun to play and why it has such a large player base right now. 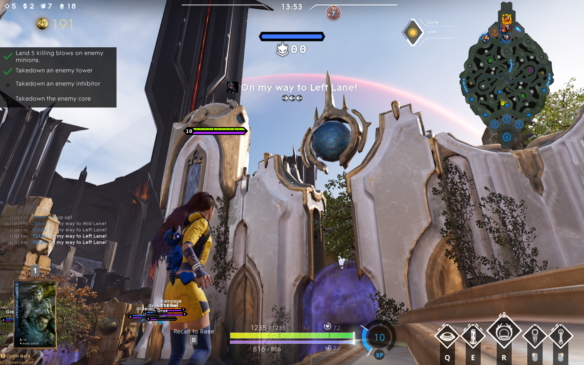 The Cast of Heroes

From cat men, frozen archers, chaos wielding madmen, to full on armored soldiers and robot cannoneers, Paragon has a very good cast of unique heroes that each have their own backstory, personality, and ideals. What I found enjoyable is how each hero makes comments when they are fighting based on what they’re doing at that time. It adds that communication for the team where there was none in other games. If you are attacking the right side in other words, your hero will call it out to the others on your team to let them know what you’re doing so they can help. If you’re being ambushed and getting hurt badly, they will also call that out. So in general, it really helps to tie things together when there would otherwise be no team communication.

Each character has their own weapons, unique abilities, and battle styles as well. For me, I played as a hero who could blink from one area to the next and summon an ice guardian to confuse my enemies. This required a lot of practice to get used to, but she was able to do heavy damage once I started upgrading her basic attack and ice ring abilities. Overall though, there is a great selection of heroes that you can play right from the start (after the tutorial of course). 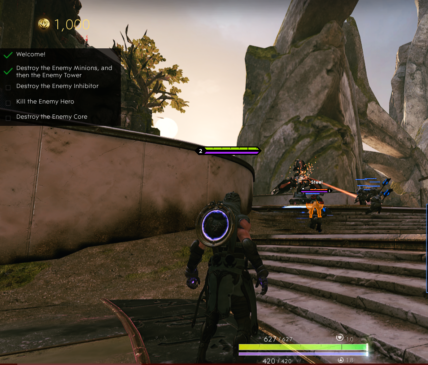 So, if you’re like me and find playing against some players to be completely unfair due to their experience compared to your own, then you will like the fact that you don’t have to play against any of them, ever. That’s right, Paragon has two PVE modes that you can enjoy with AI enemies, although they’re not the most intelligent.

The first mode is a purely single player with a bunch of bots to assist you. You will go against an army of bots as well, while trying to coordinate with your teamwork inspired AI. The great part about it, is that the AI actually try to coordinate with you and keep close to you when you’re pushing, while breaking off when you retreat to heal up for another rush. This mode is a great way to play the game at your own pace and enjoy the content as you see fit. It’s also a good way to learn new heroes and their abilities without the match ending in 5 minutes.

The second PVE mode is a co-op mode. This pairs you up with other players to fight against an army of bots. While it’s no story-driven campaign, it is a great change in the genre adding a wider player base since not everyone wants to play against very experienced Chinese players. This mode allows you to learn how to play as a team and use heroes that compliment other players so you can eventually become that experienced player and not fret over the PVP mode anymore.

Regardless which mode you choose, the rewards are usually based on your performance in the match. Although, a full AI game is definitely going to have less rewards since it’s just bots and anyone can beat those. It is like this to balance it out and reward those daring enough to fight against other players. However, you can get everything the PVP players can get through the co-op PVE mode as well, making it more enjoyable to everyone since it’s easier to fight what you know you can beat than a mysterious group of opposing players.

If you’ve played battle arena type games before, than you know the Arena well. Each team starts at opposite ends of the Arena and must work their way through a maze of towers, AI creatures, and armies of minions from the other team in order to reach the enemy base. Paragon is no different on this front. However, the arena itself is not the traditional three lane type of arena.

Instead, you are playing your character in a third person over the shoulder format. This puts you in direct control of your hero and right up in the maze that is the arena. In Paragon, the arena is broken up into 6 different ways. Each hero has a preferred method of helping their team achieve victory, even for the AI controlled bots. Depending on what the hero prefers, that is what they should be doing since they will excel in that area of the battlefield.

For example, if you’re playing a jungle hero, you should run through the jungle part of the arena and battle the creatures to gain their powerups for yourself and your team. This also grants you a lot of experience so you can level up and further increase your power and chance of winning the match for your team. There are also buffs that are given to the entire team because of the jungle mobs. Other methods involve dispatching a bunch of minions in order to build up a meter that will allow your team to spawn greater minions with more survivability and attack power. You could also be a frontline soldier, playing the traditional middle, left, or right lanes. This style is straightforward, push to the enemy towers and attack with the help of your minions. Whichever way you play, there’s a hero to help make the job easier, or five! 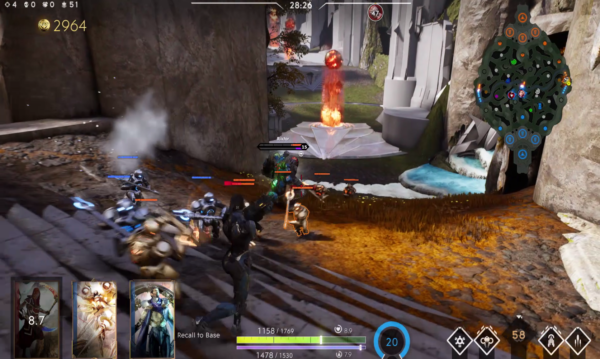 As with most other games of this type, you have a way of making your favorite heroes better than their original state when you first got them. Over time they can gain experience, level up their mastery levels, and gain better abilities in most cases. In Paragon however, it goes beyond that. Your heroes don’t only have levels and a few abilities that also have levels, but you have cards that can aid you in the battle.

Cards are drawn from your deck at the start of the match, as well as when you select a card to use. Each card gives special effects, passive or active abilities that you can use to benefit you and your team. Leveling up pays off! Each deck can be built based on what you prefer to do for your team, or even if you’re that lone wolf type that hates teamwork. What you put in your decks is up to you, and you’ll get a plethora of cards to choose from once you complete the tutorial.

After you level up, you can upgrade your main abilities, but killing enemies also grants you credits that you can spend on upgrading your stats. You can upgrade three basic stats, agility, intellect, and survival. How you spend your credits is up to you and your preferred playstyle. I tend to go for intellect and survival since I like quicker cooldowns and faster regens. Each card has a cost before you can add it to one of your three slots. Based on what you spend your credits on, you will be building up points in those attributes that are used to place a card into one of your active slots. After you place one, you will gain it’s effects or ability to use freely in the battle. Some cards will be removed once used, so be sure to take note of their effects and use them accordingly. Or you could stack passive effects and never have to worry about it!

Now for gems. Each deck is allowed 6 gem slots to use to give your heroes that use that deck an added boost. Whether you like more health, faster movements and attacks, or just raw power, there’s a gem for you. Again, you have the same three stats for what type of gems you can add. You can put all 6 points into a single type, or a few into each attribute so you’re well rounded. As you play and earn rewards, your collection of gems will increase allowing you to customize your decks gem bonuses to the best suited format for you. Gems add effects like 20% chance to increase attack speed for 10 seconds, or healing when you drop below 40% health, or something that just makes you move quicker passively over the entire battle. Building your deck and equipping it with the best gems to suit your favorite hero is the key to becoming a god amongst the battlefield!

So, like any other battle arena game, you get a lot of playability, but also good characters with their own personalities. Being on the battlefield at the heroes level really helps to bring immersion into the action, making it more enjoyable overall. While the traditional battle arenas are fun, this type has more of a true MMO format to it, where what you do matters and the simplest of mistakes can cause your entire team to be overrun. The gameplay is quite balanced, and even AI controlled heroes have goals they will compete for on their own. Even if you’re a pure PVE player like many, you will still find a decent challenge. Getting overrun by a bunch of powerhouse melee heroes as a ranged one is not always easy to survive. Being able to jump around helps quite a bit when it comes to escaping or pushing forward as well, especially when you have a wall ability that will block your opponents while you can jump over it!

I found the game enjoyable myself, and this isn’t really the type of game I usually play. If you want to play a battle arena game that has true teamwork, card based abilities, and a unique arena, give Paragon a try and see if it suites you as well. It’s also a good change to play in third person rather than always being in a top down perspective. It helps to admire the detail put into the game world as well as the characters and abilities. The lag definitely shows for the amount of detail as well though. Either way, Paragon provides a fun challenging gameplay with the option to play against AI instead of players with your friends.