Another great battle arena MMO has been released, and with it a new “Tag system” where you can use two separate heroes to perfect your strategy while battling it out against other players. So, what is Master x Master? MxM is a mmo battle arena that puts in a unique blend of story, minigames, teamwork and pvp into the traditional style of mobas. The game is set in a scifi space station in orbit of Earth where you are a Master who has joined the fight to liberate Earth from its conquerers. The story will take you through many locations as you learn the game and fight to take back control of key locations around the world, each more difficult than the last. Lets go over what makes MxM so enjoyable!

To start off, you’re only given access to 2 Masters, Lua and Sizuka. Lua is a long ranged rifle user who excels in dispatching multiple enemies with her frontal cone blast ultimate. Sizuka on the other hand is a duel wielding melee character, capable of extremely fast attacks that do lower damage. This is just the starting crew. After playing the story for a few levels, you’ll have enough tokens to unlock more Masters and add them to your playable characters.

There are over 38 Masters in total, each with their own playstyle and skill set. The characters come from a wide variety of games that were developed by NCSoft from Guild Wars 2 to Blade and Soul and so on. Whether you prefer to be the frontline tanker, the ambushing dagger user, or the literally cannon blasting your enemies from a great distance, you will definitely find the Master combo that fits you best. 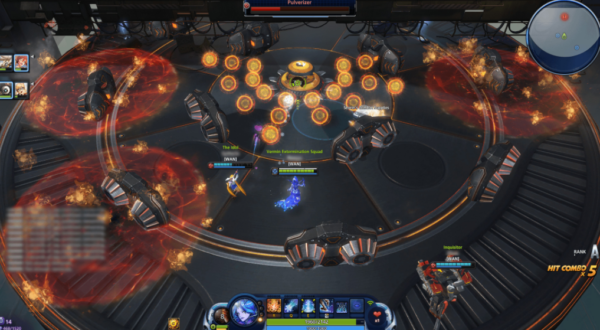 A MMOBA with a Story

Something that sets MxM aside from all the other mmobas out there, is the storyline of the game’s setting. Earth has been conquered and the humans were forced to leave the world in ruins in search of a new home in space. Along the way, they ran into another race of intelligent beings that were also fighting the race that conquered Earth. From here, the Master program was put in place, where the two races work together to help liberate Earth as a team. This is usually where the Tag system comes into play, having one Master from both races completing missions together.

However, the story is more complex and winding than just that. To liberate Earth’s regions, you’ll have to complete many missions that are ever more difficult than the previous. Each region has different enemies that will try to prevent your mission’s success. Calling down aid from the Master HQ is always a good idea when your Masters need that extra bit of health or mana. From minions to bosses and boss mechanics from some of the greatest MMO’s on PC to date, you ill be presented with a fantastic story with full voice overs and different mechanics in each mission. This is what makes MxM very different from traditional mmobas.

As one would expect from this genre of game, there are a lot of cosmetic customizations. These range from new outfits to new hairstyles or even glowing effects around each Master. Make your heroes your own! The only downside to these options, is the way they are obtained. You can get 1 or two costume tokens in a day from the daily missions or you can do the weekly ones to get them as well. The only other way to obtain the costumes is the straight out buy it with cash. These are purely cosmetic though, so unless you feel you HAVE to have that space helmet on Lua, then you will likely find the long route better in the end. Each outfit costs a number of Costume tokens, from 15 to 250, so you can see where it becomes a real pain to get the one you want for free.

Having customization for cosmetic purposes is great and all, but what about skills and loadouts? MxM has that too! Once you have your desired Masters, or if you’re like me and collect them all, then you can customize their loadout and skill sets as well as level them up to be more contending against those powerful players who never stop playing the game. 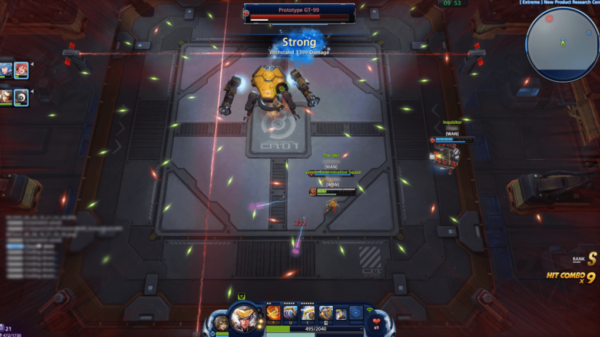 Each character has 2 active skills they can use, 1 support, 1 evade/defensive, and 1 ultimate skill in each battle. The type of skills that fills each category is dependant on the Master’s class, whether they’re melee, tanky, or range. Each skill is unique in every way, and no two have the same exact effect. How does it tie into the game though? Teamwork. Using the proper skills to assist your allies in their push forward is essential for achieving victory. If you’re the tanky class Master for example, you will be able to shield nearby allies and take the brunt of enemy towers’ attacks allowing them to break them down with their dps. But if you’re the Support class Master, you’ll be able to quickly AOE heal nearby allies and boost their abilities such as damage or defenses. Each character will have a small variety of skills you can use in their loadout though, so you’re not forced to be a healer as the support class, or the one shielding others as the tanky class. It’s up to you to fill the role you’re best at.

In addition to just being able to change which skills you can bring into battle, is the ability to level each skill up 10 times. Each level will unlock new added effects, from range increase, attack speed, more bullets, all the way to cloaking effects. This is the best way to get the most out of the Masters you like best, so be sure to level up those skills! 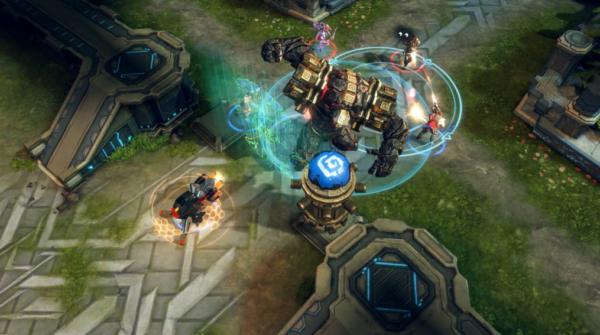 Other ways to be Great

Skills and levels are not the only ways to boost your power and survivability on the battlefield however. You can also equip 7 different boost items that will increase your base abilities. Each Master has a bonus for getting the boost loadout that they prefer, support being more tuned toward mechanics boosts, while a tanker is more suited toward defensive ones. You can choose to follow their preferred style, or go all out in whichever category you like, boosting your abilities in that field to the max. For me, I prefer to focus on health and attack since I’m usually the ranged gunner hitting my enemies from behind my allies. You can also get special powerups in certain battles (mostly the 3v3 arenas) when an enemy is defeated. If an ally falls in battle, you can collect their soul for a short boost as well.

So if you’re like me and have enjoyed several games NCSoft developed in the past, then you’ll remember some of the iconic dungeons and boss fights that occurred in those games. Good news! Every week, you’ll get to participate in a new mission that is essentially those dungeons and boss fights! The week that I played, was the Arconian dungeon from Guild Wars 2 where Rytlock was my commander and we assisted him through the catacombs and fought the necromancer at the end of them. Avoiding those traps sure brought back memories! And if you do the mission enough, you could unlock the Master from that mission. So of course, I had to get the items needed for Rytlock since he was one of my favorite GW2 Heroes.

You can choose to do these missions alone or with other players, depending on your preference and how difficult you’d like the experience to be. The more difficult it is, the better your chances at getting the epic loot from the end cards. This goes for any of the story missions as well, since those are all solo and give the end cards too.

The Types of PvP

Alright, so naturally what’s a MMOBA without PvP? Well…it’s not an arena. So of course, MxM has PvP, and a few different types of it as well. First off, there is a 3v3 arena. This one is more skill based since you won’t have AI controlled allies helping you out, no special titan to summon, and weaker towers. That means it’s up to you and your team to work together and take out the 3 enemy players. Next up, we have the 5v5 Arena, my favorite, where you can summon AI heroes from catacombs, take down bosses, or even become a Titan yourself and bring chaos to the enemy’s doorstep! The final type is more casual and friendly based PvP, in the form of minigames where you will go head to head against other Masters to find victory in that minigame. Whether you’re hardcore, casual, or somewhere inbetween like myself, you’ll find a good medium for PvP in MxM. 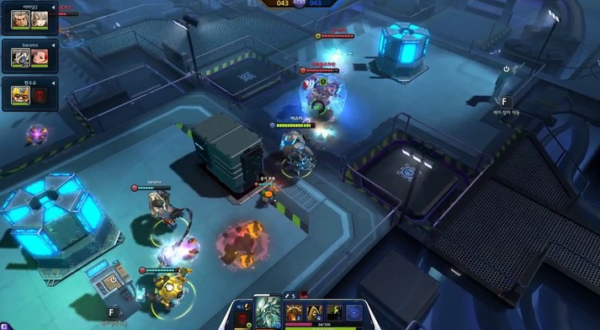 Initially, I thought MxM would be like all the others, but once I got through the tutorial mission, and found myself in space with all the other players, I knew it would be different. Diving into the story was an interesting concept for this type of game and it definitely paid off as I was left wanting more parts of the story to find out what would happen next. From obstacles to boss fights, the story was great and had a sense of direction and a goal to continue for. The arenas are another great thing I enjoyed, and I was surprised since I’m not a MMOBA player and have always been terrible at the few I did play. But, once I was given the vote to become a titan by my other teammates, I brought the hammer down (literally) and pushed our group into the enemy’s main base.

The thrills in the game is fun and there must be strategy behind every move or it will end in failure. This is what I thought made this game different from all the other zerg MMOBAs where rushing was the only option. The 3v3 arena is more that style, where it’s following the real classics, while the 5v5 throws in a lot more PvE elements and the Titan summoning every 100 points to keep things chaotic and enjoyable.

Overall the game is very fun, and the community isn’t half bad either. There’s a good story and several unique missions and arenas to participate in. But, even if you’re not there for the PvP, you can go along with friends on missions against AI controlled enemies or do the weekly missions as a team. And then, adding minigames to the bunch just tops it off with a bit of the game for everyone. So, if you’re someone looking for a fun MMOBA with a unique mix of gameplay, community, story, and great graphics and effects, then give Master x Master a try. The only thing I saw that was a real problem was the matchmaking, as it matched everyone of every level together so it could be very unbalanced at times putting newbies against level 99 pros but other than that, it’s manageable.