Felspire is a fantasy-based MMORPG in which you, the player, take on the role of an adventurer thrown into the chaotic remains of the world, abandoned by the Gods both peaceful and benevolent, and cruel and sadistic. These very Gods are the source of the devastation, having started a war in which both the immortal sides of good and evil found themselves facing off, with mankind forced to try and survive between them. With their absence, chaos has taken over, and creatures of the abyss have infested all the lands which they can reach. It is up to you – and the few other remaining adventurers – to attempt to combat the darkness, and restore peace to the world. 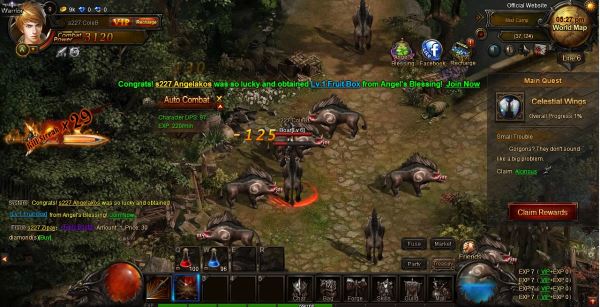 Now if only the game were as good as its description…

The design of the game is not all too unique, but nor is it all that bad, either. The graphics are of a more classic HD style, maintaining a simple, but still visually pleasing overall design. For a game that requires no download, but rather merely internet access without high system requirements, this is pretty good.

The soundtrack is severely lacking, in that there is no soundtrack. No music, nor anything similar, can be found in the general world, or anywhere else in the game. The only sound to be found is a generic “attacking noise” (which will be heard each time your character attacks, regardless of what style of attack takes place) and the grunts and calls of the beasts and enemies which players will find themselves facing. Admittedly, the latter is not bad, but the former will quickly grate on the average player’s nerves after continuously fighting for more than a minute or two. My advice? Play in silence, rather than using the game’s offered sound systems. 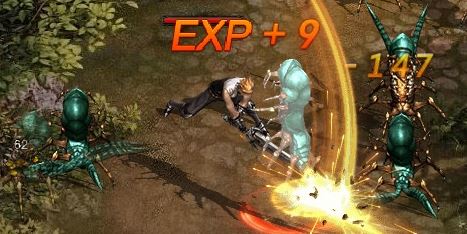 Good luck having an original character in this game. Players have the initial option of three general classes: Mage, Archer, and Warrior. I do not think there is much explanation for these, as they are the very same classes which can be found in just about any fantasy role playing game, regardless of the format. If players reach level 120 (which should not take long at all), then they will have access to a fourth class – Saint – which can attack with a mount, as well as basic attacks found by the other players. How one would switch to this class, however, is a mystery, given the game does not give any noticeable way of swapping out characters once the game has begun, nor does it have any noticeable login/logout feature within the game.

There is no customization for the characters whatsoever, beyond choosing a nickname, which can be randomized into gibberish for those lacking the creativity to come up with their own name. Genders for player characters are restricted to a very simple class structure: Mages are female, and every other class is Male. If you want your character to seem unique, track down some new equipment in-game and give them a garbled nickname. Guaranteed you will stick out, if only a little bit.

The NPCs (non-playable characters) found within Felspire suffer the same issues as the player characters themselves – lack of originality. Honestly, after speaking to some of the characters, I would swear that I have seen an expy of each and every one in other games. The only thing that makes them stand out from other characters is their name, and their style of dress. Their speech and mannerisms do not change much, if at all.

Players have access to the same features one would expect from your average MMO game (ie: forming guilds with other players, open chatrooms for player discussions, and ranking amongst players). Beyond that, there is not anything inadvertently unique about this game.

Felspire gameplay was – at best – poor. Everything is controlled via the mouse and keyboard (as one would expect of your average MMO game), with the player having the opportunity to take on quests, fight monsters, and spend real money inside an in-game “mall” to acquire more and unique equipment.

However, the game holds one feature that utterly ruins it: autoplay. Normally, this is a harmless feature which can be found in several (if not all) MMO games, allowing a player’s character to move seamlessly from one checkpoint to the next without the player being forced to scour the map for their next location. However, this game has cranked it up to the next level – and buried themselves in the process. Autoplay in Felspire can essentially run the game by itself. If a player is idle for more than a minute or two, it will automatically start, and the player’s character will continue on their quests and communication without them. Even things such as continuing dialogue is done automatically. As a test, I left the game running by itself for five minutes. Upon returning to the screen, I found my character had leveled up immensely on its own – which brings me to my next complaint.

The game is too easy. I have played games meant for children that was more difficult than this. There is next to no challenge, and with autoplay, the laziest of gamers can easily become one of the top competitors, without lifting a finger.

To make matters worse, the game has an exceedingly irritating feature in the form of in-game events. While the game allows you to minimize the initial sections advertising these events, there is nothing stopping the game from advertising them across your screen, with no ability to remove them from your site. All you can do is wait for them to disappear on their own, and hope they don’t cover your view for too long.

All in all, Felspire is most definitely not a game I would even consider recommending to anyone else. In fact, I would rather use it in warning: games that are advertised as “the best” and look to have every aspect of a great game may quickly prove to be one of the worst. Do not waste your time, or your computer space attempting to play this. It is just not worth it.