EverEmber Online is very charming and retro free to play MMORPG with old school graphics. It sort of looks like a mixture of Runescape, Ultima Online, and Endless Online. The website for the game is https://everember.com/. 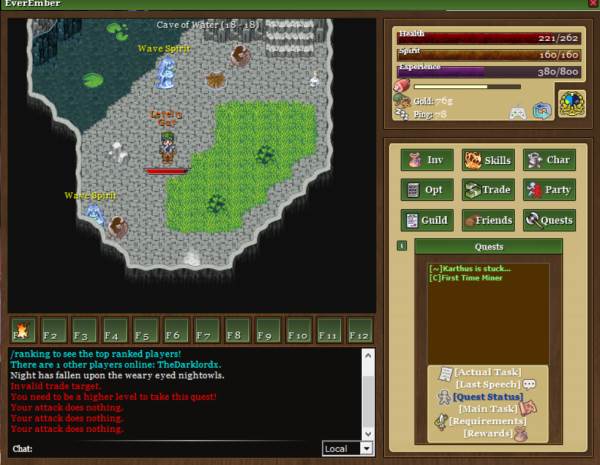 Ever Ember Online is an MMORPG set in a wide open world devoid of any need for main objectives or quest lines that define the experience you have with immutable step by step directives to satisfy a story. Instead you decide how you want to play – creating your own stories by freely exploring the landscapes of Ever Ember and completing tangential missions that roughly weave together this personal eclectic through line.

The wonderful thing about Ever Ember’s world is that is it easy to navigate and maintain a sense of direction as you wander aimlessly. In some similar games you can easily get lost in a labyrinthian mess of roadways in all directions and even caves systems that are not part of any map. Ever Ember makes simple yet distinct transitions between towns that are themselves memorable enough to mark them permanently on your mental map.

The evident intent with Ever Ember is to recreate that feeling of 90s and early 2000s classic games, and it achieves this in a few key ways that it presents the world to the player. The first is the beautifully detailed pixel art style that is closely reminiscent to the time complete with minimalist animations that despite being somewhat rigid exude a sort of cozy warmth that wraps you up into the game. The next way it lures you into its world with a little nostalgia dust is through the music. From the moment you step out into the world its as if the game extends a hand to you. The quality and indelible nature of the songs tie the world together and make you feel right at home.

Finally, the best part about the classic feel to Ever Ember is that it doesn’t entirely hold your hand as you play. You move through the tutorial that gives very minimal basic information, but once you step into that world you are on a journey to uncover all the rest for yourself. The beauty of it is that it develops this sense of discovery that brings with it a positive feeling of accomplishment when you find out how to do something that was once a mystery to you. And if you were to ever be truly lost, the game corrals you into interactions with other players to glean some tips on how to approach things, which fosters this fun, diverse, connected community.

The control scheme continues this emphasis on the games of old with a simple set up that is easy to pick up and play immediately. It boils down to movement with the wsad keys, the control key for interaction with NPCs, and spacebar to pick up items on the ground. You don’t use the mouse for the most part, unless you are navigating the dialogue box or arranging items in inventory. This is great as a way avoid any sort of boundaries to getting started and thus allows you to charge headlong out of the gate and quickly get into the action.

The screen itself is divided into three sections  that are comprised of a Log of Actions/Dialogue Box, Inventory/Stats, and finally front and center the Gameplay Screen. This design for the UI in coordination with the player screen keeps everything at your fingertips for easy access and quick deliberate action. 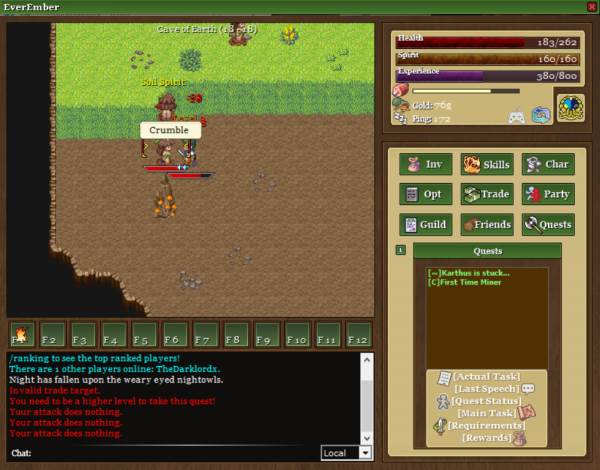 Ever Ember Online is a game that is propped up by its strong connection to and influence from classic games, and thus it is not reinventing the wheel, but rather going back to appreciate it. You will do typical things like exploring an open world, crafting, combating dangerous monsters to level up, communicating with NPCs for quests and items or human players for PvP and trading. It even includes a quite well done player based economy that is completely dictated by the actions and reactions by the players within the game. It makes a reliance on player based items through the crafting system and once again nudges you to interact with your fellow players as it is the most effective pursuit in this economy.

The focus to connect human players by bringing them together through the fundamental fabric of the game makes it this collaborative, living community. Doing anything as a team makes the experience that much more enjoyable – from grinding exp to gathering resources as a unit it converges each players personal stories that form these unique moments. Ever Ember creates this environment that encourages you to play a certain way while leaving you to do as you wish but without compromise in either decision.

What makes Ever Ember Online great is that even though it has a nostalgic lens it does not limit itself entirely to the mechanics of the past and instead does its best to blend the old and newer ideas together. An exemplar of this idea is the lack of leveling for individual skills. There is no need to engage in some very specific level grinding like woodcutting or mining for hours, and instead the focus is on the primary level alone.

The game strips it down even further and avoids using any sort of classes to dictate the assignment of your skills that narrows your focus. You build your skills your own way.

The combat continues the trend of minimalism and limits it to selecting an enemy and holding the attack button as you switch between different attack methods. It is separated into ranged (bows: quick and weaker – staffs: slow and powerful) and melee where you get close to the enemy and wail on them until they drop. It isn’t exactly an invigorating experience but it serves its purpose and gets the job done.

In terms of magic it felt sort of the same way, but there was only one real problem that created some bafflement. When you get a spell it does not immediately show up in your skills list until you are at the right level, which can be sort of confusing at first and hard track as you may forget you have some powerful spell.

An unexpected and welcome inclusion was that of a base survival system that surrounds your hunger. There is a meter that tracks your need for satiation and once it falls below a certain level there are stat repercussion that impact your player. So if your player is starving you suffer a debuff of -15% HP and SP until you eat again. This system integrates perfectly with hunting and fishing, which are primarily be used to support your hunger or even feed your health bar. This collaboration adds an extra layer to the experience that works very well and makes for an interesting dynamic that manifest as you progress through the game.

When you meander through the world of Ever Ember Online you want to soak it all in. It has a wonderful classic feel demonstrated in its detailed art style and nuanced music tracks that culminate in this casual, cozy atmosphere.

For those that are looking for an old school MMORPG that harkens back to games like Runescape and even old school Pokemon, this is a perfect game to jump into without hesitation.