Dungeons and Dragons Online is an incredibly large free to play MMORPG that uses some unique features to set itself apart from the others that are out there. While it is not perfect, it is certainly one of the best MMORPGs on the market. It knows what it has going for it and with its regular content updates, members will always be satisfied. It is not only a great free to play option, but it stands toe to toe with many of the pay only games as well. Available for both PC and Mac. 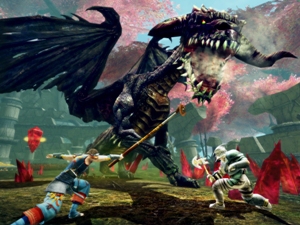 At first look, DDO is an MMO that provides its users with a great amount of content and customization. This is true, but when the player dives deeper into the game and sees what it truly has to offer, they will see that it is so much more than that. The game is an action based game, so the battles do not get stale easily and each quest has its own unique story. When a player enters the world of Dungeons and Dragons Online, they are opened up to a clean MMO that knows what it is doing. There are many gameplay mechanics and features that keep players coming back for more, as they cannot find another game with the same style. It is addicting and it certainly cannot be beaten quickly.

The visuals of Dungeons and Dragons Online are stunning, if players own the right equipment. This MMO is not necessarily made for low end computers. For players that have a decent computer a high tech gaming one, they will find they can run this game with ease, however, if they are using an old desktop that is not meant for this kind of activity, it simply won’t play. Dungeons and Dragons Online has great artwork and the scenery is always pleasing to look at. The sheer amount of detail in the game is also breathtaking. It will be a pleasure for fans off the D&D to see the world they know and love come to life, but it will also be appealing to people who are unfamiliar with the series. As for the sound, there is nothing rather special about it, but it definitely suits the game well. It sets the mood and it helps the battles feel more engaging. From a visual and audio standpoint, Dungeons and Dragons Online is a top notch game.

One of the greatest things about Dungeons and Dragons Online is its customization. Players can spend an incredible amount of time adjusting their character to their liking, both aesthetically and for functionality. Members can choose from 6 different classes, but only four of them are available for free: Human, Elf, Halfling, Dwarf, Warforged (Must pay for this race), and Drow Elf (Must pay for this race).

Each race has slightly different starting attributes, so each race is initially better tailored for different classes, however, players can make their character into any type of fighter, no matter their race. There are also 11 different classes that a character may be, with 2 of those classes requiring a payment in order to access them: Fighter, Rogue, Wizard, Ranger, Bard, Sorcerer, Cleric, Paladin, Barbarian, Monk (Must pay for this class), and Favored Soul (Must pay for this class).

As usual, each class has many different features and abilities, so it is important to go through them all before making a choice. With all of these options, players are given an immense amount of control over the character that they play. This does not stop after the character creation portion of the game either. It continues all throughout the game. For example, there are multiple different styles of clothing and armor that provide a large amount of customization. In addition to that, two characters can have the exact same armor with the exact same stats, but they can look completely different from each other. It is all based on what the player chooses and how they play the game.

Many MMOs attempt to keep their game current and try to add new content for their players, but Dungeons and Dragons Online has taken that to the next level. This MMORPG is constantly being updated with features that enhance gameplay and content for users. The initial quests and missions are great as it is, but DDO still provides players with numerous expansions and free content. There are hundreds of missions and quests for the player to complete, so there is no chance that they will finish the game anytime soon. If a player does somehow manage to complete almost everything in the game, which is unlikely, by the time that they do, there will most likely be another batch of free content. This is great for players that enjoy sticking with one game for an extended amount of time.

Players will be amazed at the diversity of the quests in Dungeons and Dragons Online. Some of the missions can take a simple 15-20 minutes, while others may last hours. Each quest has a unique story, enemies, bosses, and loot. Every quest will feel different from the last. DDO has also done a fantastic job at changing the objectives in missions. Most MMOs command players to execute a number of wild creatures or defend certain locations for a specific amount of time. While DDO does have things similar to this, it has many unique objectives that are both fun and engaging. Players will find themselves actually caring about NPCs and wondering what may happen next. This is part of what makes gameplay so addictive in DDO. Players are not only focused on upgrading their character and becoming stronger, but they actually care about the tasks that they complete.

In most other games, players can experience from completing quests and also killing various monsters. In Dungeons and Dragons Online, players do not receive any experience points for slaying beasts. While this may seem like a negative, it is actually a breath of fresh air in this MMO. By doing this, it eliminates many issues like kill stealing and grinding. The most common issue people have with MMOs is the amount of grinding that is required. In order to do well in the next quests, a player must level up. The only way to do that is to go out and slay around 50 boars that roam around outside a village. After about boar number 6, this becomes quite tedious. Players will receive a great amount of experience by doing instanced quests. It received some criticism when the game first announced it, but they quickly won over their player base one people saw how effective it was. It also allows people to focus more on the story and the quest, rather than killing minions.

Dungeons and Dragons Online is obviously meant to be played with friends. First, it is an MMO. Second, it makes the party system so smooth and easy to use; it is encouraged for every player to use it. While players can do missions by themselves, they can also party up and accomplish them with a group. The loot is automatically divided up among party members, so there will be no squabbling over who gets what. In addition to that, DDO’s experience system eliminates the problem of kill stealing and it ensures that every player will get an equal amount of experience. Groups are also extremely easy to find. Numerous guilds are accepting members or players can simply ask around for a few members to join. It is so easy to do it just makes sense to go throughout the game with a party.

Dungeons and Dragons Online is not focused on PVP, but it does offer an option for those who wish to engage in it. The PVP system offers no rewards to players that use it, so it is all for fun. In some ways, this makes the PVP more enjoyable as it is less stressful. The main form of PVP is the Tavern Brawl. In Taverns there is a section in the back where, once entered, players will be flagged for PVP mode. All levels are welcome into the pit, so be cautious. There is also a way for players to battle one another in an arena. Players will take their characters and battle against each other. This can be done one on one or in a group battle.

Dungeons and Dragons Online is an incredible free to play MMO. It offers a massive amount of content and its customization features are second to none. It truly lets players play how they want to play. The quests are unique and exciting, so they will be great for veteran MMO players or newcomers. This is an MMO that everyone should try, as it is a great deal of fun and it is free of charge.