Black Desert is an ambitious project. The developer, Pearl Abyss, is seeking to create a sandbox style MMORPG world. Here is our review of the upcoming free to play MMORPG. Our reviewer, Christopher, played the second closed beta (in Korean since there is no English translation out yet). 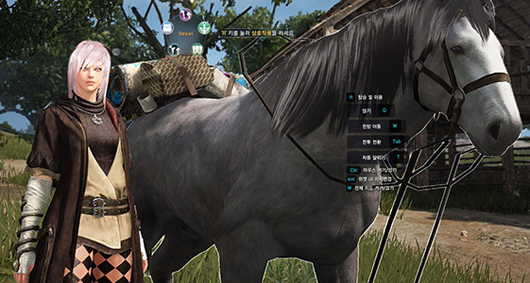 Although I was playing from a beta participant perspective, I had a lot of fun in Black Desert Online. From the breathtaking graphics to the dynamic gameplay styles, there was always something that would shock and awe.

Although the game is far from being completed, it’s off to an amazing start and I can say this is by far the best beta I’ve ever played in a game before. There were a few minor bugs and nothing is translated as it was a Korean beta UI which made it difficult to follow some of the quests as well as the initial character creation.

In Black Desert there are many classes to choose from, each with its own playstyles. The combat system focuses on action more than anything else, resulting in player skill being the main factor in determining how successful the player becomes. With open-world housing, although limited on the amount of space, the game offers its players a home in the vast landscapes. Because housing is limited, getting them is first come first acquire. Players can enjoy and participate in parkour-like gameplay and mounted combat. 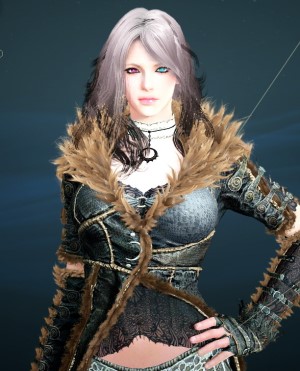 Black Desert is a huge sandbox oriented MMORPG that provides a variety of unique experiences, from strategy-oriented action such as castle sieges and complex battle to sophisticated simulation content such as trading, NPC-hiring, and real-estate management.

As the game is still in development and is currently in beta 2 phase, the choices are still a bit limited in terms of customization of character creation. There are currently 4 classes to choose from each starting with a preset look that can be customized by the player. These are the Warrior, Hunter, Sorceress, and Predator classes.

There are three races to choose from as well: Humans, Elves, and the Giants. While these all have their differences that are clear, they all have a similar design as to how customized they can be.

It is rumored there will be other classes after the game progresses more, such as Valkyries, Archers, Wizards, Bladers, and Assassins that are currently in development.

Currently, after selecting the class, the customization options branch out greatly. You can choose from a set of preset looks for each factor of the character from face to body. After that you have an option to go into advanced customization for each part of the details which creates an absolute in-depth customization layout for the characters. 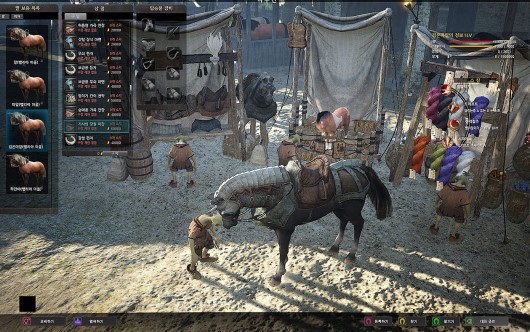 There are many mounts to choose from in Black Desert, most of which are tamed in the wild by the players themselves. There are a few rewarded by quests as well though for those not actively into catching mounts in the wild.

Players can receive their first mount from a quest at lvl 15, which is the Donkey mount. Faster horses can be bought with other upgrades as well. All mounts require feeding or they’ll run away. Mounted combat is also offered in Black Desert, and requires more precision and skill than unmounted combat. Being a tamer, you could unlock mounts unavailable to other classes.

In Black Desert players can acquire their own house to live in alone or with friends. They can buy size-varying houses and tents. Both can be decorated with in-game items received from crafting, quests, NPCs, or even boss drops.

Housing areas are open-world and not instance based, meaning they’re out in the open and visible to everyone in the game and anyone can enter the player’s home as long as their permissions are set to allow access to other players. Houses can be rented from an auctioneer for at least 3 months by visiting the auctioneer, who is only available for a certain time each day.

Housing is very limited as there are only about 100 lots available and it’s based on a first come first receive idea so it’s important to try being quick about receiving one in order to get it before someone else.

The houses can be customized by many different items allowing many ways for players to make their home unique in whatever layout they choose to put them.

PvP in Black Desert is open-world but it can be toggled off by the players who prefer to be PvE only. This creates a nice balance between both groups of players and allows for those who want to PvP to do so freely.

While PvPing, your mount can be killed, as well as items being dropped upon death. So in a sense it’s hardcore all the way for those who choose to keep PvP toggled. Since Black Desert is a seamless, open world game, players could be chased through the entire map while in PvP mode.

GvG PvP styles will be allowed in the game where the guilds can clash against each other to prove who’s dominant. This also ties into the siege warfare as well where one side can siege a castle or fortress owned by the other. Players can be knocked off mounts or have their mounts knocked to the ground with them on the mount. Cannons and other siege weapons allow for an interesting take in siege warfare.

Overall, Black Desert is definitely following up on its promises to be a truly unique sandbox MMORPG hybrid. The game world is huge and has a traditional faction vs. faction theme where the two nations are locked in never-ending war. From beginning to end, there is a ton of things to do and there is always something to do for everyone.

We hope you enjoyed this game review. Black Desert is currently only available in Korean and there is no official release date yet for the English version. If you are looking for a good MMORPG to play, try one of our Top MMORPG Lists.